Your Health vs. Cracker Plant Jobs 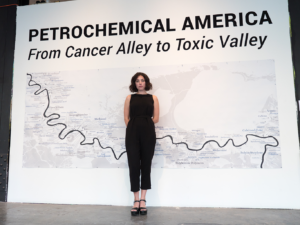 A petrochemical plant is not the only industry that can bring Beaver County tax revenue, employment opportunities, and thriving hotels and restaurants. A $6 billion investment into solar arrays, wind farms and green chemistry ventures would create these same benefits without health “trade-offs,” and hopefully without a $1.65 billion tax break for a multinational corporation. It could happen if the investor had the foresight and courage, in the face of climate change, to pursue clean energy — which now employs twice as many Pennsylvanians as the fossil fuel industry.

Pollution from Shell’s ethane cracker will be a major issue impacting everyone in the region, especially people in proximity to the plant — 2.25 million tons of carbon dioxide equivalents is a staggering measure of the greenhouse gases that will be released each year by the largest ethane cracker in North America.

The plant will also emit up to 522 tons per year of volatile organic compounds — three times the VOC output of the Clairton Coke Works — to create asthma-inducing ozone. It will release more than 30 tons per year of hazardous air pollutants, which, like VOCs, include benzene, linked to cancer and childhood leukemia; tolulene, linked to brain, liver, and kidney problems and to spontaneous abortion and birth defects; and, in levels surpassing those of the Clairton Coke Works, the No. 2 cancer driver from air pollution in southwestern Pennsylvania: formaldehyde. The plant will release 159 tons per year of PM2.5 — particulate matter that can pass straight through the lung’s alveoli and into the bloodstream to contribute to cardiovascular and respiratory disease, as well as to lung cancer and bladder cancer.

If the plant is built, hundreds of trucks will spew diesel exhaust daily into the air to serve the giant regional spider web of well pads, compressor stations, cryogenic stations and pipelines — each with its own hazardous pollution — that will be needed to feed this Shell cracker alone. That’s not counting the four to seven more petrochemical plants planned for the area. Add to this picture the polluting plants that will spring up near each cracker because they can process ethylene into plastic products, and you have an astonishingly toxic air soup.

All these emissions will permeate Beaver County, which already has an “F” for ozone smog levels, according to the American Lung Association. And since air quality is regional, bad air will drift into the Pittsburgh region, with its ALA distinction of already having the eighth-worst air quality in the country.

Toxic air + large population = many people in the crosshairs for future harm.

Allegheny County has no reason to welcome the cracker when it ranks in the top 2 percent for cancer risk from air pollution and when its childhood asthma rates are already at around 50 percent higher than the national average.

Given that health impacts increase exponentially with increases in pollution, it is no wonder that the Pennsylvania Medical Society called for a moratorium on fracking, or that Physicians for Social Responsibility and the state of Maryland have joined New York in calling for a total ban. Hundreds of medical studies have linked fracking infrastructure or emissions like those from Shell’s cracker to increases in asthma, cancer, cardiovascular disease, endocrine disruption (think thyroid and male reproductive disorders) and birth defects.

When it comes to competing messages from Shell, elected officials, and environmental activists, a simple test of credibility is to look at the source.

Shell — which, as reported in The Guardian in February, made a 1991 movie about the dangers of climate change that it subsequently withdrew from public viewing — has no reason to divulge health impacts information or, for that matter, to even acknowledge its existence. In fact, its PR staff and pro-gas marketing campaigners are paid big bucks to spin endless variations on the undocumented but media-embraced narrative of the ethane cracker as the only path to jobs.

Meanwhile, our elected officials are courted, and their campaigns contributed to, by the industry. Some have gas leases on their own properties.

But the plant’s opponents are another story. Most are unpaid volunteers who work tirelessly, through underfunded channels, to unmute the truth of the health-impacts story. Their motive is not profit or electability.

When this planned petrochemical hub has fracked every inch of southwestern Pennsylvania and our rising oceans are choked with an excess of plastic, we will be left asking ourselves, “How could we have not seen it all coming?”

And it may be up to someone else — provided climate change fueled by the industry’s methane emissions leaves some of our species unscathed — to explain to our grandchildren how we traded our health —and our very lives — for a corporate state.

Terrie Baumgardner is a member of the Beaver County Marcellus Awareness Committee (marcellusawareness.com). She lives in Aliquippa.