Paddle Against Petro United Three States Against The Gas Industry. The Campaign Continues

By Center for Coalfield Justice and the Breathe Project

On Monday June 18th 2018 more than 60 “kayactivists” from three states met on water and land for the “Paddle Against Petro” on the Allegheny River.

The event was held in conjunction with the start of Northeast U.S. Petrochemical Construction conference inside the David L. Lawrence Convention Center, which draws executives form Shell, Chevron and other industry, and government representatives. This was the first event to draw organizations from three states – Ohio, Pennsylvania, and West Virginia – to join in a protest against the petrochemical industry.

Kayactivists were joined by land activists who spoke during a rally about the effects the petrochemical buildout would have on their lives and health, including people from Beaver County, Pa. and Belmont County, Ohio where petrochemical plants and ancillary industry are planned. The event gave a voice to people living near gas fracking sites that will continue to increase to meet the demands of plastics production in other areas of the world.

“Industry markets this as a mega-petrochemical hub game-changer for our states,” said Dustin White, project coordinator for Ohio Valley Environmental Coalition (OVEC) and resident of Charleston, WV. “In reality, this is a deadly game where out-of-state companies profit while the rest of us lose a chance at a healthier, more sustainable future.

“When it comes to the health and economy of our region, coal companies dug the graves, fracking companies built the casket and now petrochemical companies want to put the nails in the lid,” White added. “We deserve better than a continued legacy as a resource colony where workers and communities have to sacrifice themselves for profit.”

More than 75 organizations have so far added their support to a sign-on letter that was sent out to leaders and legislators in three states and the letter has already gone out to local elected officials in three states. The sign-on letter campaign will be active through the fall and will be highlighted at the next petrochemical industry conference. Anyone wishing to add their individual name or the name of an organization is encouraged to do so.

Here is the link to the organizational sign-on letter:

Here is the link to the individual sign-on letter: 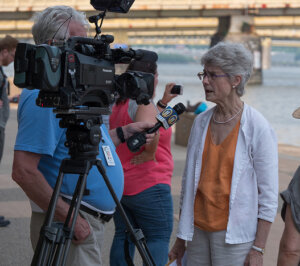